After six glorious years we had to say goodbye to Scott in 2021. We are very grateful to have had him on board since the beginning! Scott’s hard work and dedication is a key part of our success and growth. His unstinting drive and humour will be missed by staff and customers alike. Best wishes Scotty on your new adventure! 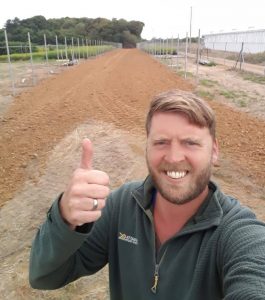 We are grateful for the support of the EU agricultural fund for its assistance through a Countryside Productivity Small Grant in the implementation of improvements to our Irrigation and nutrition control systems with the addition of weather stations, chlorophyll monitoring and data communication across the nursery.

The weather station now provides the nursery the most accurate control and calculations using its sensors for rain, temperature, light – solar and UV, humidity, wind speed and wind direction. The individual sensors of the weather station can also operate independently of each other to control the irrigation. 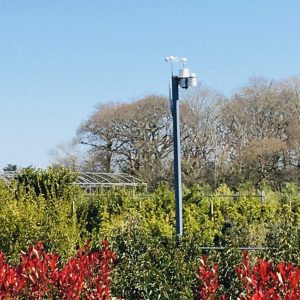 Adjacent to Mr Evergreen in Lymington are our good friends at Pinetops Nursery. Twins Ian and Stuart Paton who run Pinetops with their family also grow champion pumpkins. In 2020, with the help of Mr Evergreen’s Scott Mackenzie, their contender was hoisted onto special scales to be judged. Weighing in at a whopping 2,593.7lb / 185-stone with a circumference of about 20ft, they smashed their own previous U.K. title of 2,433lb! Just 31lb shy of the world record, but it’s a new British record, making them 2020 Champions.

Speaking after the weigh-in Ian said, “I first grew a pumpkin aged about 11 and it weighed 56lb. Now ours grow that much in a day, they’re incredible beasts.”  In 2018, the brothers held the U.K. record for their 2,433lb pumpkin and are looking forward to smashing the coveted World record one day soon.

This prize pumpkin grew an astonishing average of 51lb a day for 21 days by the end, requiring about six hours a daily attention. It was displayed in the Old Covent Garden in London leading up to Halloween 2020, after which it travelled to raise money for charity. Keep checking back for more news and updates. 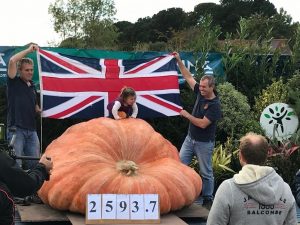